When the Missouri Department of Transportation requested proposals for replacing a 56-year-old, 670-foot-long interstate highway bridge spanning the Gasconade River, it added an extra challenge: A bonus for getting it done quickly.

To complete the $4.5 million project, the westbound lanes of Interstate 44 would have to be closed at the bridge, with westbound traffic shifted to the eastbound side of the highway. Only one lane of traffic would be open in each direction along a half-mile stretch — creating a traffic slowdown that MDOT wanted to be as brief as possible.

“The OxBlue camera helped immensely. I didn’t have to be on the site all of the time, but I could still get  a visual of what was happening and use that information to plan what needed to happen next.” —Chip Jones, Division Manager, Emery Sapp 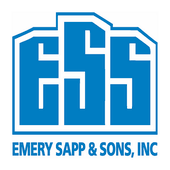 Emery Sapp & Sons stepped up with an innovative and time-saving plan. Rather than tie up traffic for weeks by building the new bridge piece by piece at the site of the existing bridge, the general contractor would build a new bridge nearby, then slide the fully constructed structure into place. The goal was to limit traffic disruption to 20 days. If it worked, Emery Sapp would earn a $600,000 early-completion incentive.

To adhere to this aggressive timeline, the firm needed to manage every moment of the construction process with maximum efficiency. That’s where OxBlue’s on-site, web-enabled camera proved invaluable.

Using OxBlue’s camera and technology, Emery Sapp project managers could log on from the firm’s headquarters in Columbia, Mo.—more than two hours away from the bridge site—check progress, and keep the project rolling along.

“The OxBlue camera helped immensely,” said Chip Jones, the Emery Sapp division manager who oversaw the bridge replacement project. “I didn’t have to be on the site all of the time, but I could still get a visual of what was happening and use that information to plan what needed to happen next.”

In addition, the camera helped Jones spot errors early and address them before they grew big enough to disrupt the schedule. “I could talk to the superintendent and really visualize what was happening on site,” said Jones, who monitored the camera throughout the day.

The result: Emery Sapp’s precise planning and constant monitoring led to success — and $600,000 in incentive pay. The firm finished the bridge replacement project with only 20 days of traffic disruption. Ultimately, the crew slid the new bridge into place in just one working day. The whole project “would have been a lot harder without the camera,” Jones said.

Now that the project is complete, Jones has a different use for the OxBlue images that helped Emery Sapp stick to its aggressive construction schedule. The time-lapse photos are great for showing prospective clients what the firm can do, he said, adding, “A picture is worth a thousand words.” And $600,000.