OXBLUE DOCUMENTS ONE OF THE WORLD'S LONGEST ARCH BRIDGES 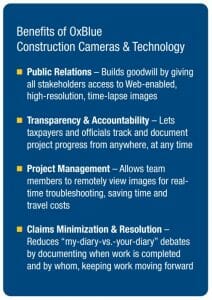 CHALLENGE: Increase public support and goodwill through use of always-on construction cameras

Building what would be one of the world's largest arch bridges over Nevada’s Galena Creek was an audacious plan — the kind of big, bold idea suited to a region that is home to the Hoover Dam. But constructing the 1,719-foot-long structure as part of the Interstate 580 extension between Reno and Carson City would not be quick or easy. The Nevada Department of Transportation needed public and taxpayer buy-in for the project, which had been considered off and on since the 1950s.

So project managers came up with a big idea of their own: An array of on-site, Web-enabled, high-resolution construction cameras that would feed public interest in the $400 million project and give taxpayers a constantly updated view of the bridge’s progress.

“The cameras improved trust with stakeholders and increased accountability for the department and our contractors.” —Todd Montgomery, NDOT Assistant Construction Engineer

The rugged terrain and lack of power and landline telecommunications could have thwarted the plan, but OxBlue got the job done using solar-powered stations and cellular-based cameras.

“OxBlue rose to the occasion,” said Randy Bowling, one of the founding principals of the engineering firm Bowling Mamola Group, which managed the project for NDOT. “OxBlue gave us reliable remote cameras that were solar powered and operated on a cellular network. OxBlue was just superb.

Since 2006 the OxBlue cameras have given Nevadans — and anyone with an Internet connection — a photo chronicle of the Galena Creek Bridge project. Most viewers are locals, as NDOT intended, but not all. One engineer in Great Britain starts his day by checking in on the bridge’s progress.

“The cameras provided us with a visual form of transparency and a public-information tool,” said Todd Montgomery, an NDOT assistant construction engineer who oversaw the planning and design phase of the bridge project. “They improved trust with stakeholders and increased accountability for the department and our contractors, as well.”

Bowling agreed that OxBlue’s cameras have been a public relations success. That was not a surprise. What did surprise him was how effective the system has been in improving project management.

“These were uses that we had no idea of at the time that the cameras went in,” Bowling said. “This has proved to be a huge benefit from a project-management and claims-avoidance perspective. The result has been a substantial savings to NDOT.”

“OxBlue’s technology has been extraordinarily easy to use. It’s easy to set up, easy to maintain,” he said. “What’s more, the support is unbelievably good. We are absolutely, without reservation, thrilled with what OxBlue has been able to do.”