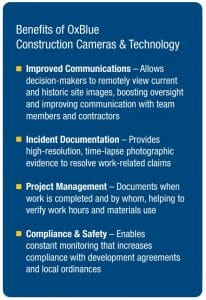 Every construction project manager expects delays, but nothing quite prepared Massaro Senior Project Manager Mark Hartman for what his team encountered at a job site in Logan, West Virginia.

Luckily for Massaro, the state had required on-site, Web-enabled cameras for the $11 million state office building project. The aim was to give construction managers and officials across West Virginia a way to simultaneously track progress and improve accurate and timely communication.

When a nearby building went up in flames, a portion of the structure broke off and landed in the middle of Massaro’s construction site. OxBlue’s time-lapse cameras captured clear, high-resolution images of the blaze and the destruction it caused. “We were able to document the entire fire,” Hartman said.

He sent the images to insurers and state officials as indisputable proof of the damage and the need for a project delay. “Under the contract, we are bound by time with a penalty for being late,” Hartman explained. “We were able to document why we couldn’t work after the fire.”

During cleanup, Hartman used the cameras to monitor progress without leaving his office in Massaro Corp.’s headquarters, 300 miles away in suburban Pittsburgh. He knew exactly when it was time to send the construction crews back in, all without spending time or money on travel to the worksite.

But the story doesn’t end there. Soon after crews returned, workers unearthed what appeared to be a grave site. The project again came to a halt while experts analyzed what turned out to be a Native American burial ground. Archaeologists moved in, and Massaro’s crews moved out. Hartman once again relied on OxBlue cameras to monitor progress at the site and determine when construction could resume.

“The cameras have been extremely helpful in the documentation process. I can see the whole site or zoom in on something specific,” he said. “I can look at my computer screen and see that the archeologists are digging in 30 different places. Once again, it helped us document the delay.”

Beyond fires and archeological finds, OxBlue cameras have provided more predictable benefits, such as improved project management, Hartman said. He and his colleagues use temperature, precipitation and other environmental information provided by OxBlue sensors to check conditions and document weather-related delays. The project team logs on regularly to monitor whether workers are following safety procedures and complying with required government regulations. In addition, Hartman attaches images to invoices to verify exactly when work was completed.