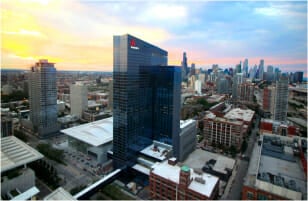 The professionally edited time-lapse captures the entire project from the ground up through more than 181,000 high-definition photos. McCormick Place developers documented the project with four OxBlue time-lapse construction cameras from different vantage points of the build.

“Chicago has nearly 50 high-rise construction projects under construction and being able to share some of that progress with the public through time-lapse photography is a great way to showcase exciting projects like McCormick Place.”
— Chandler McCormack, OxBlue CEO

The center features over 2.6 million square feet of exhibit halls across a series of four buildings: The North, South, West, and Lakeside Center. Connected by pedestrian promenades and sky bridges, McCormick Place offers a series of shops, cafes, restaurants, and other visitor amenities.

McCormick Place expects to host 4 million visitors a year in its 600,000 square feet of meeting room space and four ballrooms. It also offers assembly seating for 18,000 people and three theaters with seating for 300 each.

OxBlue, the pioneer of construction camera technology, assists project owners, contractors, and developers by bringing their job sites into focus. OxBlue’s award-winning service and wireless and solar-powered camera systems have been used on over 20,000 projects, in 50 states throughout the US and in more than 36 countries. The camera technology empowers clients to make informed, real-time decisions from anywhere and at any time, and the time-lapse photography elevates project marketing by making job sites sharable content. Most importantly, every OxBlue employee is dedicated to making the client’s success the number one priority.

A Day in the Life of an Account Executive

A Day in the Life of an Account Executive

The Insider's Perspective on Marketing

The Insider's Perspective on Marketing

The Reinvention of the Jobsite Camera

The Reinvention of the Jobsite Camera