5/12 Update: The most recent OxBlue Activity Index Report can be found here.

OxBlue’s artificial intelligence (AI) tools are now being used to measure the effects of the coronavirus (COVID-19) pandemic on construction activity across the United States. The full analysis looked at all 50 states and more than 100 metropolitan areas between March 1st, 2020, and April 17th, 2020. 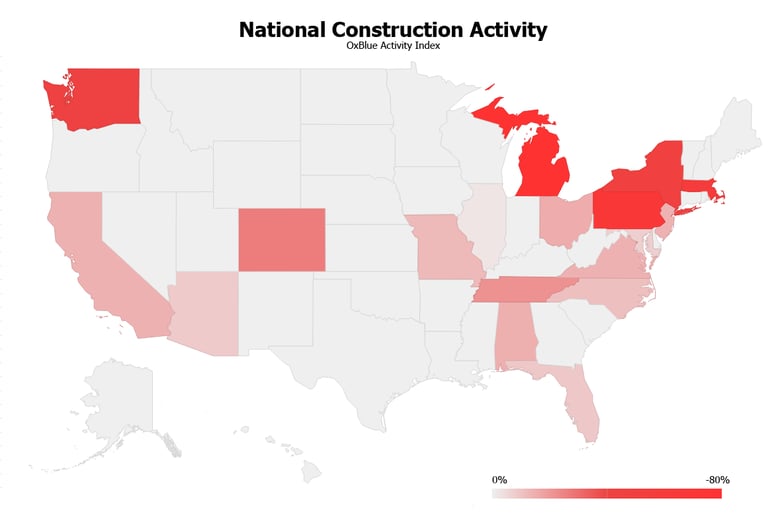 Michigan is the state with the largest decline in activity, with an 81% drop after a stay-at-home order deeming construction non-essential went into effect on March 24th. Pennsylvania, which issued its similar stay-at-home order deeming construction non-essential on March 19th, experienced the second most dramatic drop at approximately 69%. Other states with traditionally high construction volumes experiencing significant change include Massachusetts (58% decline), New York (48% decline), Washington (45% decline), and Colorado (27% decline).

While California did not make the list of states with greater than a 25% decline, its 14% decline is significant due to the state being the largest economy in the U.S. and the fifth-largest in the world.

At a national level, the data is more positive. Construction activity is tracking near the same levels measured for early March 2020. With 60% of the country’s construction concentrated in 10 states and only two of those being hit with more than a 25% decline (NY and PA), the disproportionately high level of construction in those states drives the level of national construction activity. Only six states (Michigan, New Jersey, New York, Pennsylvania, Washington, Vermont) have deemed construction nonessential.

Under normal circumstances, it would be expected to see construction activity increase in spring in some parts of the country, but we see no such increase. It is possible that this has been offset by the pandemic.

As the crisis continues, OxBlue will share regular updates on how the coronavirus (COVID-19) pandemic is affecting the construction industry and on the technology being developed to combat the spread of the virus.

Notes: The time period in this analysis includes the 35 workdays (weekdays) from March 2, 2020, to April 17, 2020. The current baseline for the OxBlue Activity Index is the average activity level for the days from March 1st to March 19th, the date Pennsylvania issued its strict shelter-in-place order. The data analyzed is from commercial construction projects and excludes single-family residential construction. States with low levels of construction activity and without statistically significant data have been excluded for accuracy. National construction activity is based on a weighted average of the construction volume for each state.

20 YEARS OF FOCUS: A REFLECTION

20 YEARS OF FOCUS: A REFLECTION